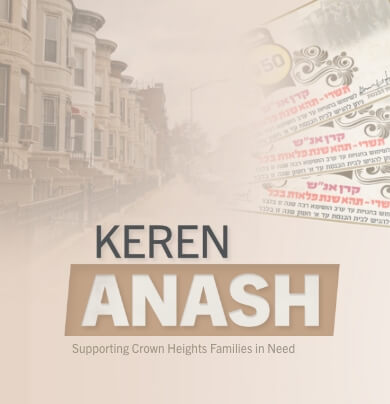 Our mission is simple: we take care of our own. Whether it’s Shabbos, Yom Tov, major life events or regular day-to-day needs, our goal is to ensure that every member of the Crown Heights Jewish community has the financial support they need in order to thrive.

Partner with us on one of our projects ensuring that our neighbors next door are taken care of!

Thank you to the following Crown Heights businesses for stepping up to the plate and helping us support Crown Heights families in need!

When the Frierdiker Rebbe first arrived in Crown Heights, he set out to establish institutions that would nurture the local Chabad community and help it grow. Alongside a shul, yeshiva, and other centers focused around the ruchnius development of the community, the Rebbe Rayatz launched a fund to support community members in financial need.

The fund, which was called Keren Ani’yim, was placed under the direction of the shul’s gabbai, Rabbi Dovber (Berel) Chaskind a”h. Rabbi Chaskind oversaw the tzedakah carefully, and under the Rebbe’s guidance Keren Ani’yim helped thousands of Chabad families make ends meet while maintaining their dignity.

It’s been close to 80 years since the tzedakah was first established. While we are now known as Keren Anash, our mission remains exactly the same: to support Crown Heights families in need.

The Mishna (Bava Metzia 71a.) tells us that when it comes to giving tzedakah, “…Aniyei Ircha Kodmin–the poor of your town come first.”

Today, Keren Anash is still administered by the gabbai of 770 and has helped thousands of our own community members right here in Crown Heights with financial support in all sorts of situations. With campaigns running before every Yom Tov and all throughout the year, we’re here to ensure that our community is taken care of.

From tzorchei hachag to simchas chosson v’kallah to our flagship keren ani’yim fund for those in financial distress, we provide whatever is needed. No matter what, Keren Anash is there to continue the Rebbe Rayatz’s legacy and provide assistance to our neighbors.

The bottom line: we support Crown Heights families in need, and we cannot do it without you.

Your Donation has been canceled

Your donation has been processed succesfully